best in the world

By Chris Russon on 2019-04-18 - The driving force behind Eurekar. Chris heads up a team of motoring correspondents under the Driving Force banner. Prior to Driving Force becoming independent in 2010 he was Chief Motoring Editor for Trinity Mirror Regional newspapers. Chris has been writing about cars for almost 40 years. 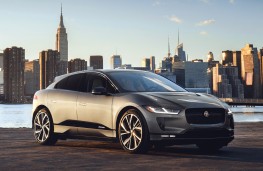 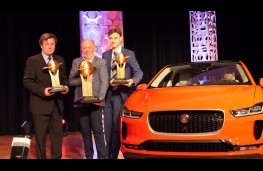 THE Jaguar I-PACE electric car has been named World Car of the Year for 2019 and has made history by becoming the first model to notch up a hat trick of honours in the awards.

Not only did the I-PACE come out on top overall it also grabbed the design of the year award and was voted best green car.

It is the first model ever to win three World Car titles in the 15 years the event has been run.

Other category winners were the Suzuki Jimny which was voted best urban car, the Audi A7 in the luxury car category and the McLaren 720S which took the honours in the performance section.

The I-PACE's unprecedented triple follows the car's success in both the European and UK car of the year award and scores of other accolades from across the globe.

The latest win for the I-PACE came at the New York International Auto Show and was judged by a panel of 86 motoring journalists from 24 countries.

Dr Ralf Speth, chief executive officer, Jaguar Land Rover, said: "It is an honour that the Jaguar I-PACE has received these three accolades from the prestigious World Car jurors.

"We started with an ideal, to move towards our Destination Zero vision; zero emissions, zero accidents and zero congestion. I-PACE is our first step to achieving this, and it was conceived when EVs were little more than a niche choice.

"So we started from a clean sheet of paper to create a new benchmark - the world's best premium electric vehicle, and a true Jaguar driver's car.

"For I-PACE to be awarded 2019 World Car of the Year, World Car Design of the Year and World Green Car gives our first all-electric vehicle the ultimate recognition it deserves. I would like to thank the team who have created I-PACE for their passion in making it so outstanding."

Ian Callum, Jaguar's director of design, who was in New York to accept the awards, said: "Designing Jaguar cars is probably thebest job in the world, and I can honestly say that no other project I've worked on has been as rewarding as I-PACE.

"Electric vehicles offer designers unprecedented freedom to rethink the proportions, the profile and the packaging, and it's an opportunity that my team has exploited in full.

"Winning the 2019 World Car Design of the Year award, as well as World Car of the Year and World Green Car, is true recognition for their achievements."

It's capable of charging from 0-80 per cent capacity in just 40 minutes from a fast charging point, or takes just over ten hours to achieve the same state of charge when using a domestic wallbox.

The I-PACE was chosen from an initial entry list of eleven new vehicles from all over the world, then a short list of three finalists as announced in Geneva on March 5.

The 2019 top three in the World Car finalists were the Audi e-tron, the Hyundai Nexo and the Jaguar I-PACE.

Jaguar I-PACE is Euro Car of the Year

ON THE eve of the Geneva motor show, Jaguar Land Rover has been given a huge...

THE Jaguar I-PACE electric car has been voted the best in Britain after...