By Ian Donaldson on 2019-11-10 - Ian estimates he has driven more than 6,000 cars (so far) in a road testing career that's taken him around the world. He has spent several years as a full-time staff motoring editor and is now a busy freelance journalist

WANT to stand out from the crowd at the Kia Stonic owners' club Christmas party? The turn up with a diesel grumbling beneath the bonnet of Kia's smallish SUV.

And yes, there are Stonic owners who share their thoughts with other Kia converts for a car that probably doesn't set too many hearts beating as it provides solidly reliable family transport with a dash of style.

Not many of them, though will be driving the diesel version on the way to meet Santa. The current Stonic price list is 14 models strong but a single one has a tank you fill with diesel, not petrol.

That's probably because most Stonic owners don't do big enough mileages to let diesel's economy advantage outflank the extra £700 it costs over the equivalent petrol model.

Should you be a rare high mileage Stonic user, on the other hand, the figure that pops up on the trip computer might make you fancy the diesel. It's not hard to see 70mpg on an undemanding run and more than 500 varied miles of testing duties recorded an impressive 63.3mpg.

That handsomely beats the Kia's official economy average and makes this a frugal way to while away the miles.

That is, until you realise your desire to drive a Stonic instead of the hatchback Rio it's closely based on under the skin comes at a cost - around £1,500, for a car whose SUV-like lines are flavour of the moment.

But then look a little deeper and you'll discover that the diesel on test costs £19,575 and comes in Kia's '3' grade trim which brings with it just about everything you'd want in your car, from alloy wheels and cruise control to reversing camera and big screen sat nav.

Add in Apple CarPlay and Android Auto, auto air con and a suite of safety kit from autonomous emergency braking and lane keeping assist and here is a car that suddenly looks a bit of a bargain.

You'll discover that Kia has kept the price down with copious use of hard plastics in a cabin that's spacious enough and easy to live with but short of the soft touches that make dearer cars feel more special. That's the deal, and it would be churlish to complain.

Drives fine, though, with plenty of pull from that diesel up front, although it likes to make its presence known even at a steady cruise when you know a petrol version would be quieter, even as it sipped more fuel.

The suspension is firm in the way of many SUVs that compensate for their taller build with stiffer springing and it shows on our worst road surfaces with a ride that's reluctant to settle down. Otherwise, this a comfy place to cover the miles. 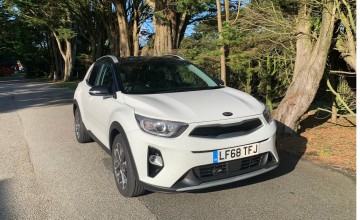 PICKING the perfect name to suit a car's characteristics and styling is no easy...