By Jon Smith on 2020-01-26 - Jon is a senior motoring journalist with a background writing for weekly/provincial daily and national newspapers and magazines. He has held executive news and features positions in Fleet Street and evening titles. Former Pirelli Motoring Writer of the Year winner. Currently specialising in product launches, safety issues, car tests and future motoring trends.

THE days when a four-wheel-drive vehicle drove like a tractor at worst and an old-school Defender at best are thankfully long behind us.

Today's brigade of SUVs are, by and large, polished and easy-to-drive with saloon car luxury and deft, nibble handling.

Inevitably there are those that deliver the goods better than others. And here we sample one of the newer arrivals out to challenge established forerunners such as the Discovery Sport, Hyundai Santa Fe and Ford's Kuga and Edge.

Good looking with a youthful accent, the SEAT Tarraco is a shade larger than most of its rivals with a length of 4.75 metres which allows it to pack in seven seats - a useful advantage for go-anywhere families.

Those familiar to VW group products will be aware of its close relationship with Skoda's Kodiaq. But SEAT in usual style has put its own more rakish slant on its development and handling, making it more appealing to younger buyers.

With a full range of diesel and petrol models to choose from, the biggest of the three available SEAT SUVs presents an appealing proposition. Top of the petrol line-up is the 2.0 TSI Xcellence Lux 4Drive, we borrowed.

With a healthy 187bhp on tap, the seven-seater has ample get-up-and-go zipping to 62mph in around eight seconds and going on to a max of 131mph. Standard kit is a seven-speed dual clutch automatic gearbox which makes light work of traffic congestion and complements the smooth flow of power.

Maybe not quite the abundance of torque offered with a turbodiesel but that's offset by a quieter cabin and a sweeter background buzz from the smooth petrol fourpot. The unit is pleasantly responsive, seldom harsh and exhibits a youthful eagerness to rev that ties in well with the brand's image.

Ride is a bit firmer than your average large SUV but never harsh and the payback is well-controlled cornering roll. Despite big 20-inch wheels bumps are easily absorbed and smoothed out making it a restful long-distance car.

The cabin is wide with loads of shoulder room and legroom front and rear. The final row is more kiddie-friendly than seating for adults but for short distances it quite do-able. With the final row folded there's 700 litres are luggage space which is near the class best. Sling them down and the capacity more than doubles to 1,775 litres.

When all three rows of seats are in use there's still 230 litres of room for bags.

Fascia styling is typical VW group, ie smart and functional without being flash. An eight-inch screen is home for the infortainment centre and sat nav which is easy to operate and reassuringly accurate. No shortage of oddment space with a large central bin that contains cup holders. Wide door pockets add to the practical approach.

Leather upholstery is standard and adds a touch of pampering but there are a few brittle sections of plastic around to remind you this is not primarily a luxury carriage.

AN upgraded version of the Cupra Ateca is on the way later this year with a... 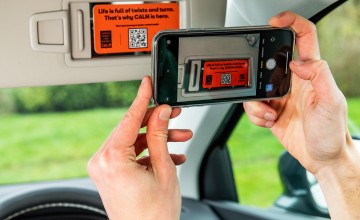 MENTAL health issues have prompted Spanish car maker SEAT to team up with the...