By Robin Roberts on 2020-03-21 - Has had with a career spent covering the automotive industry and particularly its Welsh component suppliers - he can not only tell you what goes where but possibly who made it fit. He has been a motoring journalist based in Wales for three decades. 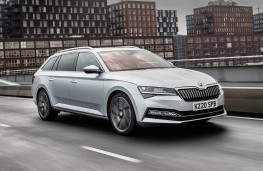 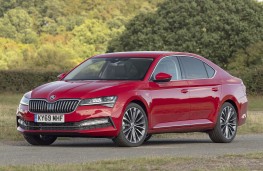 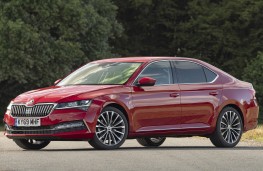 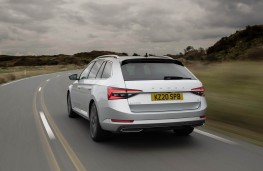 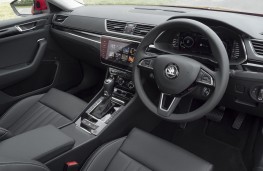 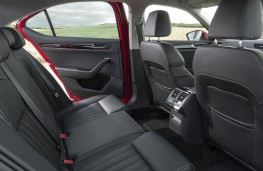 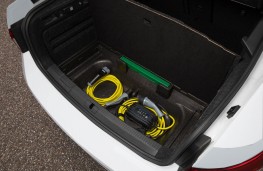 IT'S the 125anniversary of Skoda in 2020 and for 85 years it has been making models with the name Superb.

There's probably a strange truth in the fact that many people will have actually ridden in a Skoda Superb but, for a variety of reasons, they may not have appreciated that particular taxi ride.

To me it seems the Superb has become the taxi of choice for scores of private hire drivers and ride-hailing businesses and they cannot all be wrong. Reliability and running costs are vitally important for them.

There are an enormous number of Skoda Superb hatchback and estates with petrol or diesel engines as well as the newest plug-in hybrid with manual or automatic transmissions. You are really spoiled for choice.

Our latest 150ps 1,500cc petrol manual SE L is one of the most popular in the series and it has the facelift treatment to both ends, inside and has a distinctly upmarket interior which lacks nothing for the driver and passengers' safety, comfort and convenience and the engine meets the very latest green targets and lower emissions.

The engine and its power is big enough to give the Skoda Superb SE L reasonable acceleration but it's not a tarmac tearaway although it will comfortably travel all day at the legal motorway maximum.

Its gearing is biased towards efficiency and it at times happily showed over 42mpg was being achieved, but call upon it to perform briskly or with a load aboard and it had to be stirred through the gearbox and this was reflected in our overall figure under 31mpg.

The mode selection button beside the gearlever gave four different characteristics including individual settings and means you can adjust the responses, ride and handling to suit tastes and it's reflected in the performance and economy.

The Skoda Superb 150ps had a reasonably light but long travel clutch and with its positive gearchange it was effortless in town or on the open road when you had to make progress and used the sporting mode.

I liked the feedback through the powered steering as well. The turning circle was fairly tight, it did not kick-back or vibrate, it was positive on the motorway and the adjustable column will endear itself to many users.

In fact the array of driver safety aids including intelligent cruise control, lane sensing, parking assistance and automatic braking, the latest Amundsen satnav with touchscreen and integrated Wi-Fi and multi-function on-board computer made any journey very pleasing. It also had turning front foglights to illuminate a junction, a fatigue sensor and memory seat settings, but oddly no reversing camera.

While most of these were automatically activated without driver intervention, the secondary switches available were all grouped on the steering wheelspokes or close by on stalks behind the wheel. Sometimes they were not as visible as I would like but with familiarity could be predictably operated.

The fixed instruments were big and clear as was the selectable info display in the centre of the instruments' pod. To the centre of the fascia and underneath the air vents was the infotainment screen and it was big, clear and fairly quick operating but soon showed up fingertip marks and these became annoying.

The air conditioning system had separate controls to those on the central screen and had good output, directional control and temperature setting, backed up by heated seats, which were welcome on cold nights and mornings.

I was impressed by the big glovebox and central console box but small trays on the console and very shallow and narrow door bins would hold little. Those in the back have some big seatback pockets and little door bins as well.

Venturing to the boot is an adventure with its remote opening, low sill and regular shape of over 600 litres minimum capacity and which almost triples when the rear seat-backs are dropped. This is a serious load carrying hatchback and it even comes with a detachable torch to compliment the ice-scraper in the fuel flap.

Access for driver and passengers is also very good as wide opening doors mean there're few restrictions and the SE L has inviting, practical and easy to maintain leather seat covering with good support and up to five can be accommodated. Infront the powered driving seat's not matched on the passenger side with its manual controls so you can see some pound-saving there, but their adjustment range is very good and their shape supports and locates occupants very well.

The ride is compliant and comfortable in the Superb thanks to its 2.84m wheelbase, softly biased springs and shock absorbers and only the very worst bumps were felt. Usually they were heard as the Superb did let some noises into the cabin, from the road, suspension or a hard worked engine. Wind and other mechanical noises were low.

Visibility was generally very good with excellent widely dipped and long-range main beams, good bright sidelights, courtesy delay, cornering front foglights and big wipers and powerful washers. I liked the big door mirrors including blind spot detection and the slim roof pillars and deep glass. There is a hidden area behind the high tail and the radar sensors cover well, but I think it would be an improvement to have standard reversing camera featured for peace of mind.

The Skoda Superb is a big car but in reality it handles well and you are not as aware of its size as is the case with some rivals, except when you need to pack in four passengers and their luggage for a holiday or business. 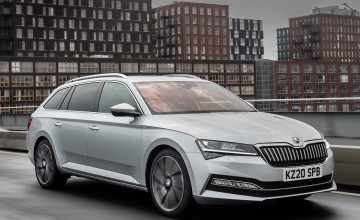 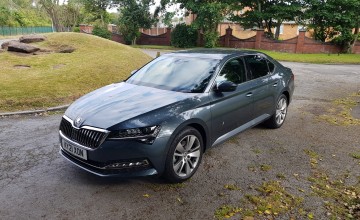 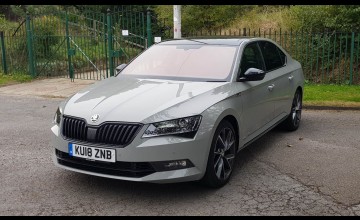