By David Whinyates on 2020-05-07 - David is one of the UK’s most experienced motoring writers and was instrumental in setting up the Driving Force syndication service for Britain’s biggest regional newspaper group. Former Chief Motoring Editor of Trinity Mirror Regionals, he is Driving Force’s Consultant Motoring Editor and a director of Driving Force Media Ltd.

FULLER details of Skoda's first electric SUV have been released along with first images of a heavily disguised prototype undergoing testing.

The new battery-powered Enyaq won't go into production until the end of the year and is unlikely to arrive in UK showrooms before summer 2021, but with more and more electric SUVs set to enter the market the Czech company is ramping up its PR effort in an effort to get ahead of the game.

Skoda claims a potential range of up to 310 miles for two-wheel drive models with all-wheel-drive variants capable of covering 286 miles before needing a recharge with an 80 per cent charge taking as little as 40 minutes using a fast charging station.

Details of trim levels - particularly for the UK market - won't be available for some time, but buyers can expect state-of-the-art connectivity and infotainment solutions and we do know that there will be a sporty, high-performance, top-of-the-rang vRS version with a claimed 0-60mph sprint time of around six seconds and 112mph top speed.

Skoda is also planning what it calls a ‘Founder's Edition' which will be equipped with special features and a different look to commemorate the founding of the company 125years ago. Less than 2,000 of the special edition launch models will be available. 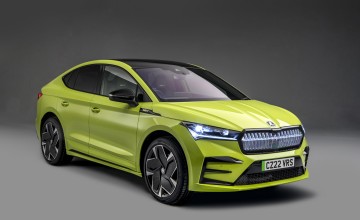 PRICES and specifications for the first all-electric Skoda to wear the brand's...

AFTER teasing the public with a design sketch in early January, Skoda has now...