By Chris Russon on 2021-02-25 - The driving force behind Eurekar. Chris heads up a team of motoring correspondents under the Driving Force banner. Prior to Driving Force becoming independent in 2010 he was Chief Motoring Editor for Trinity Mirror Regional newspapers. Chris has been writing about cars for almost 40 years. 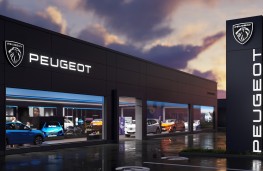 PEUGEOT has a new brand identity and logo making it the first company in the recently created Stellantis Group to get a new image.

The new logo features a lion's head within a shield and will be rolled out on the next Peugeot 308 compact hatchback which is due to make its debut on March 18.

The symbol will also be used on all of the French company's material and at it its network of dealerships.

It replaces the current Peugeot logo which has been used since 2010 although a lion has been used as its marque since its creation in 1858.

The last time the lion's head was used on its own in the Peugeot logo was in 1960 and since then it has used the whole of the animal's body on its badges.

Linda Jackson, brand chief executive for Peugeot, said that the new design was continuing a shift upmarket and was designed to embrace the shift to electrification that is sweeping the auto industry.

However, she stressed that the new Peugeot image had nothing to do with the creation of the Stellantis Group which has seen the PSA Group expand to join forces with Fiat Chrysler to make it a global concern.

Mrs Jackson said that the decision to change the logo was taken before the merger and that other brands within the new operation remained free to decide their own corporate images.

The launch of the new lion emblem will be accompanied by an international ‘Lions of our time' marketing campaign and new-look website, as well as a new lifestyle collection of clothing and accessories later this year.

The company said its new logo also shows Peugeot as a timeless brand, celebrating more than 210-years of history, while also looking to the future, new technologies and innovations provided by the new Stellantis partnership.

Julie David, managing director of Peugeot in the UK, said: "A new logo and brand identity are significant developments for any marque, let alone Peugeot, who has a history spanning more than 210 years. The new logo reflects our changing model line-up and new philosophy around living in the moment, and we are very excited to showcase both the logo and the brand identity to our customers this year."