THE influence of Jeep in the world of off-road, go-anywhere rugged 4x4s should not be underestimated.

Made famous as a military vehicle seen racing around war-torn Europe and immortalised in many films, especially as John Wayne was winning the war, it inspired the designer of the Land Rover Series I, Maurice Wilks, engineering director of Rover cars, to come up with a British alternative in 1947.

Inspired by the Willys Jeep used by the Americans, Wilks wanted to create an off-road vehicle that could double as a light tractor - a tool as much as a mode of transport. And the copycat Land Rover was born. The rest, as they say, is history.

And while the Jeep has moved on in the last 80 years, the template pretty much remains the same. This fourth generation Wrangler is available as a two, or on this vehicle a four door together with various soft or hard top combinations.

There is a choice of engines and this model packed plenty of punch with a two-litre, 272bhp turbo-charged petrol engine mated to an eight-speed auto gearbox, delivering stonking power and torque figures of 400Nm for impressive pulling and towing power. It is capable pulling of up to 1,500 kg on two-door models and 2,500 kg on this four door.

It is also pretty rapid on the road, hitting the 60mph mark in just over seven seconds. Hot hatch territory, but this is a vehicle that's hardly designed for speed and handling.

A full-fat, in your face off-roader, there is little pretence at slippery stying, more a boxy battering ram than an aerodynamic thoroughbred. It may not be the most sophisticated or hi-tech of SUVs on the market, but it certainly does what is says on the tin and is one of the most striking. If not THE most striking, and rarely equalled offroad.

The four wheel drive offers permanent, high and low gearing and lockable differential, plus ground clearance of 10 inches, steep approach and departure angles and wading capacity of more than two-and a half feet.

It is an impressive rugged-looking vehicle, which for enthusiasts that is exactly what they want, except that now is more sophisticated, comfortably doubling as family transport as well as Amazon explorer.

That must be the attraction to many buyers with its much friendlier road manners, which makes it a relatively smooth ride to previous Wranglers which bounced about all over the shop.

The road presence is unmistakeable and desirable, with foldable windscreen, large tyres encased in huge wheel arches and the signature seven-slot grille, flanked by new self levelling LED halogen headlamps, plus front and rear fog lamps.

All Wrangler models now feature body-coloured sport bars, which are welded to the body and feature integrated grab handles.

The interior too, is slightly deceptive, looking basic, but actually hosting many of the creature comforts you would want if spending £46k on a vehicle, including some soft-touch materials.

At around 16ft long, this is a big vehicle, both outside and in. A full five seater its shape means all have plenty of head and legroom, while a large boot space of 548 litres can be increased 1,059 litres by folding the rear seats. An under-floor storage area behind the rear seat provides extra, secure stowage.

A signature Wrangler characteristic remains, with washable interiors and the protective rubber cover for the infotainment system screen, that allows easy clean up in complete peace of mind. 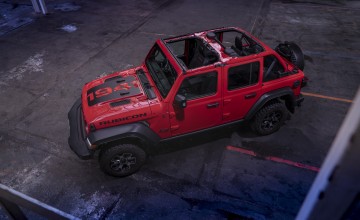