By Ian Donaldson on 2021-02-28 - Ian estimates he has driven more than 6,000 cars (so far) in a road testing career that's taken him around the world. He has spent several years as a full-time staff motoring editor and is now a busy freelance journalist

HALLELUJAH! A car maker has discovered not everyone who buys a new family car wants it to behave like a race track refugee.

Some (most?) of them simply want a comfy time for both driver and passengers and the Silverstone lap time can go hang.

So, well done Citroen for giving us a new medium-sized hatchback that majors on smoothing the way ahead and at the same time niftily rekindles a little of the magic that once made this French marque a byword for stress-free travel.

This latest C4 doesn't use anything like the expensive suspension system that made older Citroens smother roads with a magic carpet ride, instead concentrating on making the very best of conventional springing.

It adds little rubber buffers to filter out the worst that a modern road can throw at it and then pays extra attention to the seats with added padding. Twenty patent applications later, the result is a car that makes the more keenly sprung opposition (i.e. all of it) feel a little clumsy and unrefined on anything other than a perfect road surface.

The way the new C4 smoothed the worst a British main road could throw at is genuinely impressive and simply demands a decently long test drive if you're tempted by Citroen's newest model.

Your interest may first be attracted by the looks of this Focus rival, with a more sharply angled take on what is becoming Citroen's visual calling card of full width chromed double chevrons at the front and a body that sweeps rearward with to a tall tail that gives the car a subtle hint of SUV, when it's really not.

The rear window is divided by a fairly subtle spoiler that thankfully doesn't intrude annoy every time you check the rearward view in the mirror (the Honda Civic is blushing right now).

Inside, there are those new seats - looking a tad larger than you'd expected and hinting at comforts to come - and a clean lined dashboard that keeps thing simple and - second hallelujah - retains actual physical controls for heating and ventilation.

Yes, there's a touchscreen for other functions and it's clear to view and won't distract dangerously when you need to cool down. The instrument panel itself can summon up the smallest rev counter you'll ever have seem - surely a hint this Citroen couldn't care less about hanging uncomfortably on to the gears.

More on the electric version in a moment, but let's look first at the petrol C4, which Citroen predicts will be the biggest seller by far, outselling the diesel 83/17 per cent - with battery power taking 30 per cent of sales overall.

There are four non-electric trim ranges and a drive in a second level Sense Plus with 130hp petrol engine and six-speed manual gearbox (£23,005) made a convincing case for not climbing the C4 ladder - coming as standard with sat nav, rear parking camera and even a head-up display for the driver. Not so long ago a posh BMW would have puffed its chest out with those goodies on board.

Drives well too, with the perky 1.2 litre petrol engine pulling nicely through a precise gearbox and emitting the characteristically endearing three-cylinder throb under pressure.

Which leads neatly on to the e-C4, whose 136hp electric motor and 50kWh battery pack promises an official 'up to' 217 mile range and, of course, absolutely zero emissions as you exploit its 93mph/9.0 seconds performance.

There will be compelling ongoing savings for business users (63 per cent of C4 sales will be to fleets, Citroen thinks) but they'll need to offset the thumping £5,990 premium over an equivalent automatically geared petrol equivalent.

The battery powered e-C4 drives as you expect, with very little commotion from the drivetrain and a smooth and easy going feel to the accelerator pedal.

A 19 miles test drive on mainly urban roads - but a bit of 70mph main road thrown in - saw the e-C4 use 25 miles of battery range. A warmer non-winter day would have extended that a little, I expect.

Those heavy batteries mean the non-electric C4's ride is compromised a bit, with the e-C4 treating bumps with less disdain and feeling, well, just a bit ordinary. Not bad, but not exceptional either.

Still, the majority of C4 sales are going to people who'll marvel at the way their new wheels takes them on a journey that seems to have miraculously smoothed out the roads. Hallelujah again. 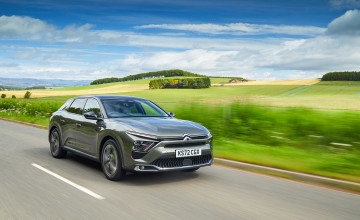 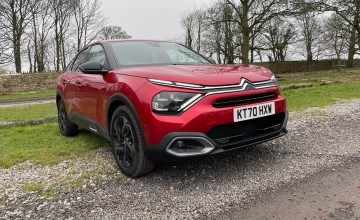