By Chris Russon on 2021-08-23 - The driving force behind Eurekar. Chris heads up a team of motoring correspondents under the Driving Force banner. Prior to Driving Force becoming independent in 2010 he was Chief Motoring Editor for Trinity Mirror Regional newspapers. Chris has been writing about cars for almost 40 years. 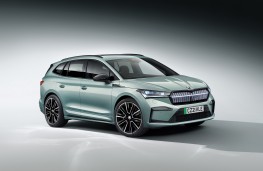 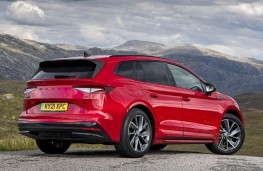 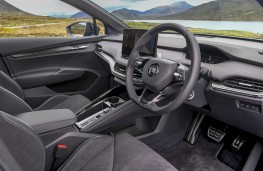 AN all-wheel-drive version of the all-electric Skoda Enyaq crossover SUV is being introduced with a fully charged range of more than 300 miles.

The 80x SportLine Enyaq will be priced from £46,610 and is due for release before the year is out.

It is the most powerful version of the Enyaq so far and has a combined output of 265ps.

Recharging to 80 per cent capacity can be done in around 38 minutes says Skoda with a full charge taking some 13 hours from a domestic supply.

With a 0-62mph acceleration time of 6.9 seconds it Is also the quickest of the current Enyaq models and also delivers more torque than the standard rear-wheel drive SportLine model with a twin motor arrangement driving each axle.

Like the rear-wheel drive model, 80x SportLine is equipped with a sports chassis set up and comes with a lower ride height that is 15mm lower at the front and 10mm at the rear.

Variable drive modes and progressive steering are also standard while dynamic chassis control is available as an option.

The Enyaq iV 80x SportLine also comes with full LED matrix headlights which enable the driver to have the high beam on at all times without dazzling other road users using intelligent technology which automatically turns off individual segments of the light beam when a camera on the windscreen detects vehicles, as well as people and objects, reflecting the light.

Inside, the 80x SportLine's upholstery and roof lining are predominantly black and the dashboard is upholstered in a black synthetic leather with grey contrasting stitching and features carbon-effect trims which can also be found on the door panels.