By Ian Donaldson on 2018-03-19 - Ian estimates he has driven more than 6,000 cars (so far) in a road testing career that's taken him around the world. He has spent several years as a full-time staff motoring editor and is now a busy freelance journalist 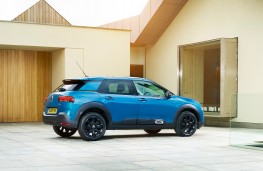 HALLELUJAH! A car maker has produced an affordable car that majors on comfort, won't set a lap record round a race track and is not - ever - described as 'sporty.'

For goodness sake, it doesn't even have a rev counter (when did you last look at yours?) and the suspension has 20 patents applied for and has one aim in life; to smooth away the bumpy horrors beneath the tyres.

So, the new Citroen C4 Cactus starts off on the right foot by simply being different to a slew of rivals all seemingly designed by hotheads who would really rather be Lewis Hamilton.

Then you discover that Citroen has added soundproofing to the car and made the rear screen thicker, all in the hunt for a quieter life on board. And still the car weighs less than its rivals, to the benefit of economy and emissions.

All this extra attention has been paid to a car that's basically been around since 2014, when its standout feature was the big wodges of plastic padding along the flanks - Airbumps in Citroenspeak - with back up protection on the car's extremities.

Well, they've been toned down drastically for the new C4 Cactus (vestiges can still be spotted on the car's lower portions) as its maker attempts to add an upmarket feel to something they must have felt looked a bit too simply basic before.

In the process an impressive 90 per cent of what you see is new, from a wider look to the front and rear and a choice of nine body colours and four colour packs that let you add touches of black, white, red or silver to front fog light trim and the reduced Airbump panels.

Inside, the old C4 Cactus's feel of more lounge than car continues and still looks as pleasantly different as ever, with four distinct styles on offer, all of them applied also to new seats that Citroen calls Advanced Comfort but which are really more the old ones with added padding - and comfy with it.

Deeper thought is applied to the suspension, often a talking point in older and now defunct Citroen models. The new set up is simpler than those but introduces welcome new thinking, with shock absorbers that do away with rubber bump stops and use extra hydraulic cushions at the extremities of suspension travel.

And it works. Within a few metres of setting off you sense the new C4 Cactus is working hard on your behalf to isolate you and your passengers from the jolts and ridges that make up a modern road.

It's not the magic carpet ride Citroen boasts about but it is instantly and continually more comfortable than its rivals.

The car is a little shorter than, say, a VW Golf and has enough but hardly generous room in the rear seat. Boot capacity is good enough not to be a talking point either.

Buy the cheapest new C4 Cactus - the £17,265 Feel Edition and you won't have the clever suspension. You also won't have much performance (105mph 13.1 seconds to 62mph) with a 1.2 litre non-turbo 81bhp petrol engine doing the work.

Economy and emissions (61.4mpg combined and 105g/km) are respectable but it's little wonder Citroen thinks the most popular newcomer will be dearer and perkier, in the shape of the £19,865 108bhp petrol model in Flair trim.

Its performance and economy (117mph, 9.4 seconds, 65.7mpg, 100g/km) make a convincing case for this as the sweetspot of the new range, coming with the clever suspension and a range of standard kit from sat nav and 17ins alloys to automatic air conditioning, big glass sunroof and active safety braking.

Second least expensive of the new range is a Feel trimmed car (with the Feel Edition as entry level come-on), with prices from £17,965 and standard kit that includes 16ins alloy wheels, DAB radio, air conditioning, cruise control and a space saver spare wheel.

Out on a mix of UK roads the 130 hp C4 Cactus impressed with a surprising turn of speed (and the pleasant thrum of a three-cylinder engine) and 49.5mpg on the trip computer suggests an economical life in the real world, where the car's fine ride and emphasis on comfort are going to win it many friends.