By Ian Donaldson on 2018-12-17 - Ian estimates he has driven more than 6,000 cars (so far) in a road testing career that's taken him around the world. He has spent several years as a full-time staff motoring editor and is now a busy freelance journalist

THERE'S a word some car makers are too keen to apply to almost every new model - sporty.

Sometimes they sprinkle sporty dust on the most inappropriate newcomer; so good for Vauxhall not to let the s-word slip from the corporate lips when talking about the new Combo Life.

Take a look at the newcomer and there's another word you might think did apply in this case - van (with windows). But, says Vauxhall with some force, it's no such thing.

No, the new Combo Life has the essential underpinnings of a proper car. In this case the Grandland X from the company's SUV offerings.

So while it undeniably bears the squared off looks that go with the van tag, here is a vehicle aimed at giving families a car-like time with maximum space.

And with the latest addition to the still young Combo Life family that space has extended still further, with a stretch between front and rear wheels so a third row of seats can be added, giving the XL the ability to carry seven adults in long range comfort.

Actually, you can order your Combo Life with the shorter wheelbase and pay £700 more for a third row of seats, but you wouldn't want to squeeze anyone out of short trousers into them. Think younger children only.

So this newest combination of Combo, seats and stretch will appeal to anyone who wants to stay friends with adults who find themselves clambering into the practical and spacious third row.

Ticking the seven seat option on the XL Combo adds £800 to the bill and gaining access means an awkward shuffle over folded middle row seats that leave little room for manoeuvring feet, but once in there should be no complaints.

Sliding rear doors mean reaching the middle row seats, which split 35/30/35 is a doddle in a crowded car park and all three of them has an ISOFIX child seat bracket so a trio of little ones can form their own bawling choir in safety.

Fold the seats down, do similar with the rearmost row and you have the load capacity of (whisper it) a van, with an enormous 2,693 litres of cargo room. Even with all seats occupied you won't want for storage capacity, with 912 litres on offer.

So, it's clear that stretching the Combo Life from 4.4m to 4.75m in XL guise has produced a car that's roomy enough for anyone this side of a minibus operator.

It reinforces Vauxhall's 'not a van' insistence with a long list of safety kit that's more usually seen on cars than commercials, with forward collision alert, speed sign recognition and lane keep assist on board.

Depending on version you'll also find a rear view camera, automatic cruise control and park assist too; making this Combo Life still less like a van.

Drives a bit like a van, you might conclude after a turn at the wheel, though. Which - he says quickly - is not meant these days as a downer.

Not a bit of it. Sitting up high with lots of glass around you and a squared off body minimises the hassle of traversing a busy town centre, while a reassuring lack of rattles and decent, if unspectacular performance from its 1.5 litre, 99bhp diesel engine means no worries about missing the train.

Top speed is a modest 106mph and 62mph arrives in 13 seconds but there's longer term satisfaction in tailpipe emissions of 115gkm, an official 65.7mpg overall and a modest group eight insurance rating.

The seven seat XL version costs £23,240 and comes in top spec Energy level trim, with the goodies mentioned above and adding features like Bluetooth, Apple CarPlay and Android Auto, along with air con, front and rear parking sensors and 16-inch alloy wheels.

So, hardly van-ish at all. Much more a car for properly sensible families. 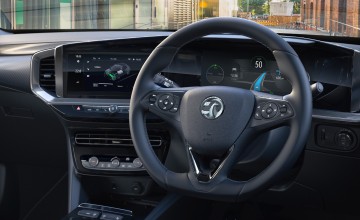 ALTHOUGH it's a city car, the Vauxhall Agila is bigger and more practical than...