By Chris Russon on 2020-03-24 - The driving force behind Eurekar. Chris heads up a team of motoring correspondents under the Driving Force banner. Prior to Driving Force becoming independent in 2010 he was Chief Motoring Editor for Trinity Mirror Regional newspapers. Chris has been writing about cars for almost 40 years. 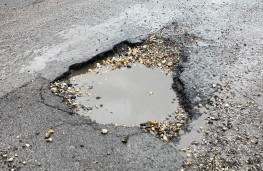 ALMOST 11 million motorists reported some form of pothole damage to their vehicle last year costing an estimated £1.25 billion in repairs.

The figures, compiled by tyre company Kwik Fit, bring the total cost of such damage to £3.4 billion over the past three years.

The average bill for each of those motorists affected over the last year was £115, covering repairs to components such as tyres, suspension and wheels,

Kwik Fit believes that the total cost identified by the research is likely to rise even further as 13 per cent of drivers who suffered damage - some 1.4 million motorists - say they have not yet had the damage repaired.

In total Kwik Fit found that some 10.8 million vehicles were damaged by potholes last year.

More than a quarter of motorists quizzed by Kwik Fit say they hit more than 30 potholes over the course of a month - an average of one a day. A third of the drivers who have hit a pothole in the last year say it caused damage, with the most common items needing repair being tyres (5.8 million drivers), wheels (4.2 million), suspension and steering at 3.8 million and 1.7 million respectively.

Roger Griggs, communications director at Kwik Fit, said:"Unfortunately, every year we are seeing a worsening story when it comes to the condition of our roads and it is the individual motorist who is hit increasingly hard.

"The immediate impact of coronavirus will mean the demands on public spending will be many, but this should not mask the fact that roads have been underfunded year after year. Once we are out of this crisis, as a country we need to plan investment for the long term and not merely look to patch things over the cheapest possible way.

"For any motorists hitting a pothole, we are operating as normally as possible."

According to Kwik Fit some 56 per cent of people travelling on UK roads believe they are in worse condition now compared to a year ago, up from 51 per cent last year.

When asked about the Government's recently announced Â£2.5bn five year pothole fund, 56 per cent said they believed this would have a slight or no impact on the number of potholes.

The experience of drivers reflect the latest report from the Asphalt Industry Alliance, which highlights that a one-off spend in excess of £11 billion is needed to bring the network back up to scratch.