By Chris Russon on 2020-08-04 - The driving force behind Eurekar. Chris heads up a team of motoring correspondents under the Driving Force banner. Prior to Driving Force becoming independent in 2010 he was Chief Motoring Editor for Trinity Mirror Regional newspapers. Chris has been writing about cars for almost 40 years. 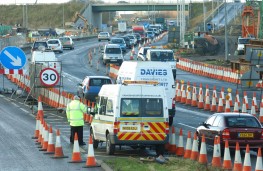 MOST motorists back the Highways Agency's move to increase speed limits through motorway road works to 60mph, according to a new poll by Motorpoint.

The online survey found 52.6 per cent of drivers welcomed the change which comes into force with immediate effect.

Some 1,024 people took part in the poll on the Motorpoint website.

The Highways Agency recently conducted a series of trials on the M1, M4 and M6 allowing cars to travel at 60mph through eight different sets of roadworks to measure journey times as well as safety levels.

Mark Carpenter, chief executive officer of Motorpoint, said: "The results of our poll clearly echo the frustration of so many drivers over the years who have spent countless hours crawling through motorway roadworks in their cars.

"It's refreshing to see the Highways Agency ‘challenging the norm' as they say and recognising that increasing the speed limit through roadworks does help reduce journey times, especially at a time when we need to get Britain moving again, but doesn't compromise people's safety in the process."