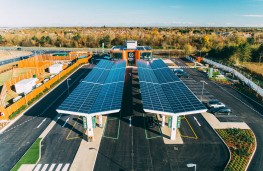 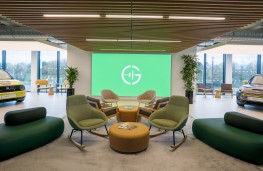 THE first purpose-built, all-electric UK service station has opened promising motorists quick recharging of electric car batteries up to 80 per cent within 30 minutes at a cost of around £10.

With up to 350kW of charging power on tap it means an average-sized family EV can add up to 200 miles of driving range from one single recharge from 100 per cent renewable energy via the National Grid.

The first such electric forecourt is situated in Braintree, north Essex - near the A120/A131 junction - with the promise that over 100 will be opened up across the UK over the next five years.

The company behind the new-look forecourt concept is Gridserve, a new sustainable energy company that will build, own and operate the sites across the UK with the aim of providing electric car and light commercial vehicle drivers a quick, efficient and cost-effective way of recharging their electric batteries.

The Braintree forecourt, which is now open from 6am to 10pm seven days a week, has 36 individual charging ‘pumps' where drivers simply turn up with no pre-booking needed, plug their car's electric lead into it and when they feel their vehicle battery is recharged up enough simply flash a credit or debit card across the glass fronted pay terminal before unplugging and then driving off.

Whilst waiting for a recharge there's comfortable interior lounge area to relax in with a coffee shop, post office and small shop while business users can also sit in comfort working from laptops with free, superfast Wi-Fi access points along with washroom facilities.

All drivers using the new Gridserve electric forecourts are initially paying only 24p per kWh for their energy (including VAT) which the company claims is the lowest ultra-high power charging rates available anywhere today.

The man behind the new electric forecourt scheme is Gridserve boss Toddington Harper who explains: "The key to this whole concept is for it to provide sustainable energy and we've done our homework over recent years to know having electric forecourts like our is the way forward.

"We know that the increasing numbers of electric car drivers want a quick yet affordable method to recharge their car batteries," he continued. 7

"For drivers it needs to be straightforward, free of anxiety that will in turn allow other drivers to have the confidence to make the switch to electric power."

He goes on: "We've also approached this new forecourt concept with a kind of ‘belt and braces' concept to ensure that recharging an electric car's battery is not just quick but also affordable and easy to do."

He went on to explain that Gridserve will have a UK-wide, sustainable energy powered network of forecourts that's convenient and allows the safest, fastest possible net zero carbon recharging of electric vehicles.

"This first forecourt in Braintree has the power coming in from our own solar energy farm about 40-odd miles away through the National Grid and we also have solar power canopies above our charging points on the forecourt," he continued. "There's also a 6 MWh battery hidden away on site to help balance the local energy grid and to shift energy to periods when it's more valuable.

"This means that in bad weather such as on winter nights we are currently experiencing our on site battery can store enough energy to drive some 24,000 miles in cars or light commercial vehicles the following day.

"This not only utilises maximum energy resources but helps stabilise the grid and in turn keeps prices low which is important to drivers," he adds. "In the near future we aim to introduce a realistic tiered pricing system too."

Mr Harper also feels the introduction of his new kind of all electric forecourts is timely because it's well ahead of the government's plan to ban all new petrol and diesel car sales by 2030.

Transport Minister Rachel Maclean, said: "As we accelerate towards cleaner and greener transport, I'm delighted to see the future of service stations being brought to life with the opening of the UK's first all-electric forecourt.

"Government funding has helped make this dream a reality and with Â£2.8bn of support to encourage the uptake of zero emission vehicles, there has never been a better time to make the switch."