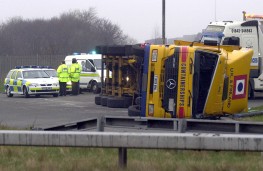 NEARLY a third of all road fatalities involve people driving for work, a landmark study on behalf of Highways England and charitable partnership Roadsafe has found.

The figures mean that more deaths occur from at-work road trips than at the workplace, despite the dangers posed by industries such as construction, farming and mining.

Most of the victims are non-working drivers, the study - which focuses particularly on the van, company car and ‘grey fleet' sector - reveals.

In 2018, 520 people died in collisions involving a driver or rider driving for work, but only 12 per cent (63) of them were working drivers or riders.

Five per cent (25) of the fatalities were passengers of a driver driving for work, while 83 per cent (432) of those killed were non-working road-users.

The figures are in sharp contrast to the total of 144 people killed in workplace accidents during the course of work in the UK in the year 2017/18.

The study estimates that up to 39 per cent of pedestrian fatalities in the UK were in collision with a ‘working' driver, causing up to 11 pedestrian deaths a month.

Conducted by UCL and Agilysis, the study says there is a ‘lack of attention to work-related road safety' by policymakers.

It warns that despite a rapid increase in the number of vans on the road (up by 27 per cent from 3.24 million light goods vehicles in 2011 to 4.12 million in 2019) and people working in the gig economy, this sector falls outside the strict regulations governing other occupational drivers.

Despite businesses switching to ‘last mile deliveries' by vans - coinciding with the boom in Internet shopping - vans and drivers are not subject to the strict driver training, drivers' hours restrictions and roadworthiness regulations governing HGVs.

On average vans are being driven 12,800 miles a year, accounting for 15.4 per cent of all vehicle mileage. Two in 10 of these journeys occur on minor urban roads.

Nick Starling, chair of the Transport Safety Commission Work Related Road Safety Forum said: "As a society, we rely on those driving for work. Twenty-nine per cent of all fatalities, 24 per cent of the seriously injured, and 21 percent of all casualties are sustained when someone involved in an injury collision is driving for work.

"Vans and drivers are not subject to the same strict regulation of driver training, drivers' hours restrictions and roadworthiness testing as HGVs and buses/coaches, while the number of vans on the road and people working in the gig economy continues to rise.

"This report highlights the importance of stakeholders across all sectors working together to understand and manage the risk better."

Stuart Lovatt, head of strategic safety at Highways England, said: "Highways England is delighted to support this important piece of research by providing the funding to enable this study to be undertaken. This report will support the objectives of our Driving for Better Business Programme which aims to raise awareness of work-related road risk to business leaders and their drivers."

The study calls for further investigation into who is driving for work, the type of vehicles used, the type of roads used, who is being injured and the numbers working in transport in the gig economy. It says that strategic stakeholders must work together to drive down the death toll.

It also calls for new links between coroners' data and crash data to improve analysis and transparency of work-related crashes.

"The working van, car and grey fleet drivers (people using their own car for work) are emerging as an increasing group on our roads but little is known about them," says the study. It says there is a "high level of risk associated with occupational driving."

The study warns that despite the high level of driving-for-work fatalities, the figures are probably an under-estimate, due to shortcomings in data-gathering.

It is not known how many people drive for work.