By David Whinyates on 2021-01-26 - David is one of the UK’s most experienced motoring writers and was instrumental in setting up the Driving Force syndication service for Britain’s biggest regional newspaper group. Former Chief Motoring Editor of Trinity Mirror Regionals, he is Driving Force’s Consultant Motoring Editor and a director of Driving Force Media Ltd. 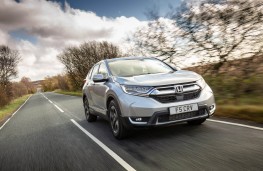 OVER half (52 per cent) of Brits believe their next car is likely to be a hybrid vehicle but, despite this strong intention to go greener, 68 per cent of petrol and diesel drivers feel like they do not know enough to buy one.

New research from Honda indicates that this knowledge gap is one of the contributing factors to Brits taking over a year on average to purchase a hybrid vehicle - highlighting a gap between people's green goals and car purchases.When it comes to technology, the research revealed that hybrid drivers consider themselves to be early adopters. A third say that they are likely to try new technology before friends and family, in comparison to 18 per cent of pure petrol and diesel car drivers.

The research also indicates that misconceptions surrounding the range of hybrids continue to be a cause for hesitation amongst petrol and diesel drivers, with 79 per cent citing this as a concern. Significantly, this no longer becomes a consideration once the vehicle is bought, with over half (52 per cent) of hybrid owners being only vaguely aware of their range when driving.

This is because range is simply not an issue, says Honda, which cites its hybrid CR-V model which has a range of between 493-539 miles - around 92 miles more than a CR-V petrol variant.