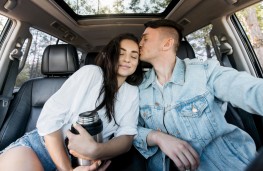 EVER wondered what gets our motors running? Well more than half of those surveyed in a new poll say they have been frisky in their car.

The poll - by Auto Trader - revealed that 55 per cent have been ‘intimate' with their partner inside a car and that the Aston Martin DBS Superleggera is the sexiest of cars.

Sunderland motorists topped the list of who were the riskiest with 80 per cent admitting to ‘doing the deed' in their car while Cardiff was at the other end of the spectrum with just 37 per cent.

And it seems our love affair with cars extends beyond the physical with some 64 per cent admitting to being in love with their car and 22 per cent saying the loved their car more than their partner.

However, proving romance isn't entirely dead, over a quarter (27 per cent) said they've given their cars pet names although some die-hards (18 per cent) claimed they'd rather break up with their partner than sell their car.

When asked what it was exactly that they loved so much about their car, almost a third (29 per cent) admitted it was its size, with one in five (18 per cent) claiming it was the way the car made them feel whilst 19 per cent said it took them to places they'd never been before - make of that what you will.

Auto Trader's Rory Reid said: "I'm not surprised so many Brits have admitted to such a naughty act in their car - as a nation, we're definitely passionate about our motors."