Life in the fast 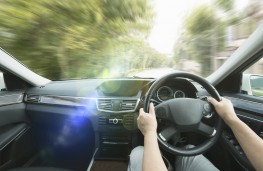 OLDER drivers in the UK clock up significantly more driving offences than their younger counterparts, according to new information from road safety organisation IAM RoadSmart.

There are currently more than 304,000 pensioners with points on their licence compared to just 12,000 teenagers - a difference of 25 times.

And the IAM research also revealed there are more than 8,500 drivers in Britain who have escaped a ban having amassed more than 12 points on their licence.

The findings came from a Freedom of Information request to the DVLA by IAM and also revealed that the oldest person driving with points on their licence was 102 while there are more than 3,000 over the age of 90 currently driving with penalty points.

The highest single age with the greatest number of people with points was 49 where 63,248 drivers had points.

Additional findings from the FOI request discovered that there is up to 8,800 people still driving with more than 12 points - the amount at which you are disqualified - while the highest number of penalty points currently held by one individual is 68.

Neil Greig, IAM RoadSmart director of policy and research, said: "The findings from our Freedom of Information request are surprising. Speeding and other motoring misdemeanours are often associated with younger drivers but the findings clearly show there is a large number of older drivers also flouting the rules.

"Regardless of age, the message we need to get through is that road safety is paramount and we urge drivers of all ages to stick to the speed limits and ensure their vehicles are in a roadworthy condition.

"We also urge government to urgently revisit the issue of drivers with more than 12 points who still have not had their licences revoked. IAM RoadSmart has been raising this issue for almost a decade now and the problem still persists.

"It's not by chance that certain drivers amass 12 or more points and they need to be removed from the public roads. By letting them keep their licence it undermines the simple "four strikes and you're out" message and this urgently needs to be addressed."