By Chris Russon on 2021-06-07 - The driving force behind Eurekar. Chris heads up a team of motoring correspondents under the Driving Force banner. Prior to Driving Force becoming independent in 2010 he was Chief Motoring Editor for Trinity Mirror Regional newspapers. Chris has been writing about cars for almost 40 years. 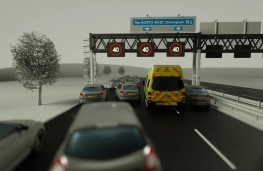 A SET of tips for drivers has been assembled by road safety organisation GEM Motoring Assist to help keep them safe when making way for an emergency ambulance.

The tips relate to locations and situations where confusion can occur, such as traffic lights, roundabouts, motorways without hard shoulders and stretches of road with solid white lines where overtaking is not allowed.

The simple-to-follow advice, approved by the emergency services, is on what to do and what not to do when helping an emergency vehicle.

GEM chief executive Neil Worth said: "Every driver wants to help and do the right thing, but the approach of a blue light vehicle can take them by surprise.

"We hope that our tips will minimise confusion and reduce risk."

At traffic lights an ambulance won't want you to go through a red traffic light. So don't break the law or take any risks by moving past the light. If you're first in the queue at a red light, stay where you are, and leave the ambulance to find its way around you.

If you're approaching a roundabout or a junction and you see an ambulance, look at its position, as this will let you know where it wants you to go. If you're already at the junction, be patient and wait for it to come past. There may be more than one emergency vehicle approaching the junction, so check before moving off.

On a road with a solid white line system, an ambulance will probably switch off its siren as it follows you. This is because overtaking is not allowed. So keep going - at the speed limit if it's safe - until you're clear of the solid white lines. When the siren goes on again, that's your cue to let the ambulance go past.

On motorways and dual carriageways, move to the left to allow an ambulance to pass in the outside lane if it's clear. In slow and stationary traffic, emergency vehicles usually use the motorway hard shoulder, so you should only go onto the hard shoulder if you have an emergency of your own.

On a smart motorway, one or more lanes may be closed because of an incident ahead - you'll know because of red X signs above the carriageway. Emergency vehicles will use these lanes if they can. Keep out of these red X lanes. If no lanes appear to be closed, be prepared to help create the emergency corridor.