Drivers miss out on 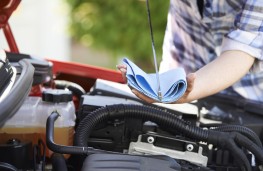 A MAJORITY of drivers are failing to check the level of oil in their cars regularly a new survey has revealed.

The study, by Castrol, has revealed that just 24 per cent of UK car owners check their oil on a monthly basis.

The new research was commissioned by Castrol as part of its Oil Check Challenge campaign, which highlights the importance of regular monitoring of an engine's oil level.

The survey found that some cars on UK roads go for extended periods without any check of the engine's oil level, with 30 per cent of owners saying they leave it to mechanics to do as part of the vehicle's annual service.

Some 32 per cent of respondents stated that they did not know the frequency with which oil checks should ideally take place.

Only 19 per cent of car owners polled said that they would check the oil themselves, but only if the car were to alert them with a warning light.

However, according to Castrol, the oil warning light on most cars illuminates only when the oil reserve is at or below the minimum, and at this point the engine can already be at serious risk of damage.

Castrol estimates that 21 per cent of vehicles on European roads are currently low on oil, and eight per cent are at immediate risk of damage because the oil level is at or below the minimum recommended level.

"It's clear from our survey that there is still some work to do in making car owners aware that their vehicle oil levels should be checked regularly, and to build their confidence in doing so," said Shailendra Gupte, European marketing director at Castrol. "Many of our Castrol Branded Workshops will offer customers free oil checks to help ensure their car engines are running efficiently and effectively."

"Drivers can also view simple step-by-step instructions on Castrol's website showing just how quick and easy it is to check and top-up engine oil. By doing this monthly, drivers can dramatically reduce the risk of running low, which can severely impair engine performance and efficiency, and potentially lead to engine damage and failure."