By Robin Roberts on 2021-10-21 - Has had with a career spent covering the automotive industry and particularly its Welsh component suppliers - he can not only tell you what goes where but possibly who made it fit. He has been a motoring journalist based in Wales for three decades. 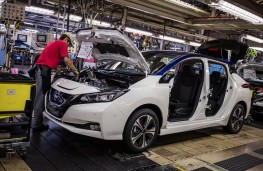 BRITAIN'S car-makers and component suppliers have opportunities as the race speeds up towards a future of pure electric vehicles, delegates to the annual Autolink Conference in Cardiff were told.

On the day that the UK Government announced a Â£620 Million grant to boost ev-sales, extend the national recharging network on-street and in homes, as well as introduce a compulsory mandate for building more pure electric cars from 2024, Professor Ian Henry of Birmingham City University said the country simply doesn't have enough traction-battery manufacturing capacity while demand is uncertain.

He told the conference that components for new models already announced would have to be imported from countries making cells and assembling them before shipping and fitting into the British-built cars and vans.

Nissan has secured a battery production plant close to its Sunderland car assembly operation but Jaguar Land Rover has not revealed its components plan despite saying the firm would go ‘all-electric' by the middle of this decade and move up market but reduce manufacturing.

It is possible JLR's Castle Bromwich vehicle assembly plant will be transformed into a battery plant, but merely assemble parts sent from abroad.

Stellantis - formed out of the merger between the French PSA group and Fiat Chryserler - has confirmed it will make electric vans for the global group once it converts the Ellesmere Port plant in Cheshire, from ICE cars' assembly to all-electric by the end of 2022 and it builds larger ev-powered vans in Luton for the group, but imports batteries, said Prof Henry.

Toyota will also import its batteries for future models produced near Derby, he believes.

Announcements about two large traction battery plants did not state who would be buying their output as car makers were are now increasingly considering building their own and cutting out the private suppliers in a bid to reduce costs and ensure continuity of supply.

Prof Henry said the UK Government has failed to grasp the full significance of its drive towards zero emissions and might lead to further imports in the British automotive sector but if more was to be made in Britain it would require a step change in mining, manufacturing and monetary policies and support.

He said there had been little discussion about the role of hydrogen in vehicle power yet it's likely to be favoured by manufacturers of some luxury and large-sized private or commercial vehicles.

Looking at the UK vehicle market, Prof Henry said that sales will never return to their 2017 high while customers can expect long delays in getting some new models and manufacturers will not enjoy a regular business return until 2023.